Go on a Tenerife road trip

In this blog, we will help you plan your perfect road trip in Tenerife. We have put together some of the must-sees of Tenerife that can be visited by car. If you don’t have a car, you can find some other possibilities for how to explore Tenerife. Down below you will find information about driving in Tenerife and the beautiful places to drive to. If you want to share your own road trip through Tenerife with others, feel free to leave a comment!

Driving in Tenerife can be an adventure in itself. There are some very narrow mountain roads on the island which are not always perfectly maintained. It can often be a difficult task to even find a parking space. The locals have very little patience when driving in Tenerife and often have their own style of driving, therefore it is good to be well prepared and have some tips for driving in Tenerife.

Tips for driving in Tenerife

• Make sure to keep enough distance from other vehicles when you drive in Tenerife. A lot of people don’t use their direction indicator and can stop or make a turn spontaneously.
• When driving in Tenerife to places like El Teide and Masca, you should be very careful not to leave anything valuable in the car if you are planning to park there.
• Try to be in the south of Tenerife before dark since many roads, especially in the north of Tenerife, have no road lighting.

How old do I have to be to hire a car in Tenerife?

Hire a car in Tenerife only if you are a confident driver – otherwise, it is not worth the stress. If you are not sure, it is better to consider one of our Tenerife island excursions instead. The cheapest car hire in Tenerife can be found at the airport. You’d have to be at least 23 years old normally and it’s a great option for a longer duration car hire. Club Canary also offers a car hire in Tenerife, no credit card or deposit is required. With Club Canary, you can rent a car in Tenerife from the age of 18 years and older as long as you have a valid driving license. Our prices for car hire start from 25€ and include insurance, car delivery and car collection. The car is normally delivered with a full or half tank and you’ll have to return it the same way. If you would like to see what kind of cars we offer, click here to contact us or send us a message through social media.

A very popular choice is to hire a car in Tenerife for 2 days. You could use the car for a 1-day west Tenerife road trip and the second day do the road trip to Tenerife north. If you would like to visit El Teide during your holiday as well, check out some of the options like Teide at night or a quad tour to El Teide.

You start driving from Tenerife south to Los Gigantes where you can find the spectacular cliffs and beautiful natural swimming pools. Then you drive to Masca, where you get to enjoy some of the best views of Tenerife and it’s also a lovely place to stop for a Barraquito. Next, you drive to Garachico where you can find one of the most popular natural pools of Tenerife. After that, you drive to Icod de Los Vinos which is famous for its dragon tree. Then you can choose to either drive to Puerto de la Cruz or La Orotava or drive directly back to Costa Adeje from the highway TF1 under Santa Cruz. During this road trip in Tenerife, you will cover about 210 kilometres and drive for about 3 and a half hours. Click here to find this route on Google maps.

This is an alternative for the road trip mentioned above and includes driving to El Teide. First, you drive to Vilaflor which is the highest village in Tenerife. From there, you’ll keep driving towards Mount Teide and once you arrive at the National Park you can enjoy a beautiful walk there and take pictures. It’s not advised to use the cable car because it takes a lot of time. After that you drive to Icod de Los Vinos, then Garachico and some other nice stops will be in Los Silos, Masca and Los Gigantes. When you follow this tour, try to leave Masca before sunset since it can be really dangerous in the dark because of the curvy and narrow mountain roads and no lighting. This Tenerife road trip is about 185 kilometers and you will be driving for about 4 and a half hours. Google maps route can be found here.

You drive from Tenerife south to the Pyramids of Güimar (if you don’t find this interesting you can skip it). The next nice stop is in Candelaria where you can visit the basilica located next to the town square and enjoy a drink or ice cream in one of the lovely little cafes. You might also consider visiting Santa Cruz, the capital of Tenerife, which is known as one of the best shopping places in Tenerife! In case you only want to see one city in Tenerife and shopping is not quite your priority, we’d recommend visiting La Laguna instead. La Laguna is a charming old city with less traffic and is home to the oldest university in the Canary Islands. Another great place to visit in Tenerife near La Laguna is Bajamar which is known for its surf culture and beautiful natural swimming pools! After seeing Bajamar you can drive through the Parque Rural de Anaga to Taganana where you can admire the beautiful nature of Tenerife. Afterwards, you can also stop by the viewpoint of Playa de las Teresitas where you can take some great pictures. This road trip of Tenerife is about 242 kilometers in total and you’re driving for around 4 hours long. You can see this route in Google maps from here.

Restaurants in Tenerife during the road trip

After or during your road trip in Tenerife you will get hungry and now that you’re away from the tourist area, it’s a great opportunity to visit some of the local Canarian restaurants. During the west Tenerife road trip, and when stopping in Garachico, a nice place for lunch is a restaurant called Los Pinos. On your way back from west Tenerife road trip + Teide and after stopping by Los Gigantes, you can visit the lovely town of San Juan where you will find a lovely fish restaurant called Taberna Maritima Agua y Sal. During the Tenerife north road trip, a nice place to have lunch in Taganana is at the restaurant called Guachinche Bibi y Mana. When you take the highway on the way back from Tenerife North and Tenerife west road trip, you can visit the fish village of Tenerife called San Miguel de Tajao, where you can find a lot of great fish restaurants and one of them is Delicias de Mar. Some of the other top local restaurants in the south of Tenerife where you can eat some good meat are Mesón Era Las Mozas and Tasca Tierras del Sur. 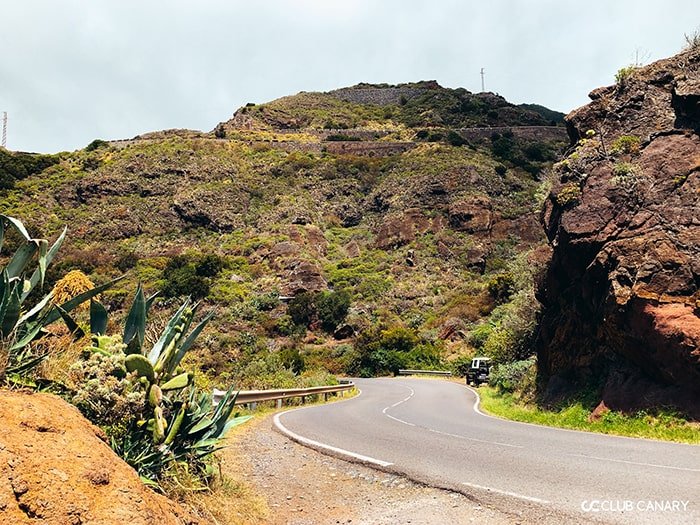