Tenerife Medieval Show is rated number 18 of the TOP 30 best things to do in Tenerife.

This is the amount you pay to reserve your Medieval show date. The deposit, in this case, is a portion of the total amount to be paid and therefore will not be returned after the activity. 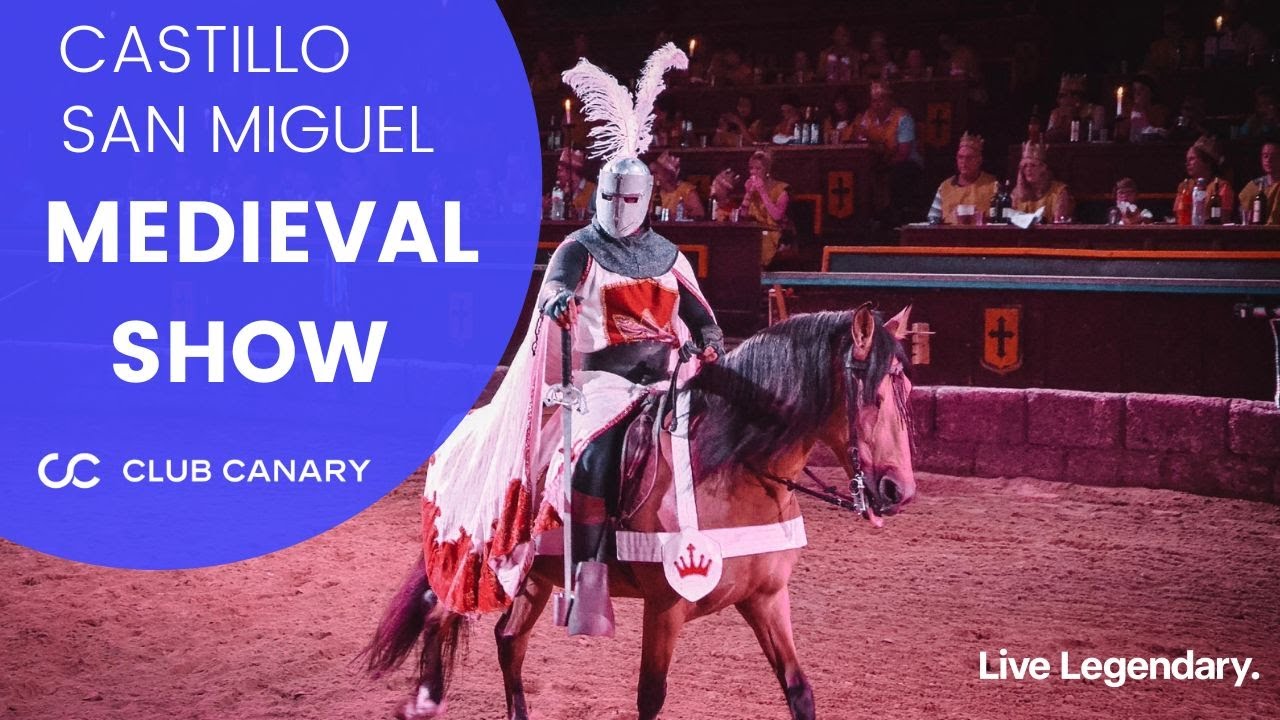 The most visited knight show in Tenerife

For years the Tenerife medieval night, has been one of the most popular evening shows in Tenerife. In 2022, after a long time, the show has changed, making the performances even more spectacular.

As you approach the floodlit castle you are greeted by knights on horseback who guard the moat and its illuminated fountains. Cross the drawbridge and enter the world of the medieval knights.

You are greeted by friendly staff in medieval costume who hand you your tabard, the colour of your team, for an evening of sword fighting, jousting and equestrian fun and games.

As you move through the antechambers and vast state rooms of this huge building you meet the Kings and Queens, jesters, knights, serving ladies and knaves who will entertain you throughout the evening.

Tapestries, suits of armour, stained glass, artefacts, huge chambers and medieval furniture are all around as you are drawn into the heart of this enchanting journey through history.

Cheer on your knights

Drinks are available at the bar before you are summoned to the main arena to cheer and celebrate the combatants who represent your colour.

The King and Queen preside over proceedings from the splendour of their royal box where they have a view of the huge arena where all of the evening’s action will take place. As the lights get brighter and the music louder there is a tension in the air in expectation of the spectacular medieval show which is about to begin.

Feasting at the medieval night Tenerife

Your place in the arena’s vast seating area is where you will eat your three-course banquet meal. From the moment you sit down you are served with red or white wine, water and soft drinks. The personal service continues throughout the amazing show as you are brought soup, chicken, carrots, potatoes, mushroom sauce or chicken nuggets and chips for the kids. Desert is a delicious ice cream with chocolate sauce.

The dedication of the performers makes this spectacle not only exciting but also believable and one of the best value nights’ out in the whole of the Canary Islands.  They are such wonderful actors who will completely convince the kids and even get the mums and dads caught up in the excitement and romance of the occasion.

Horses are the main event. A magnificent team of the most perfectly trained and superbly conditioned animals that clearly love their work. They will amaze you with their choreographed routines, speed and agility.

The premise of the show is one of chivalry and honour where the teams of knights compete in jousting, sword fighting and all number of medieval games to win the favour of the King and Queen. The actors, the horses, the costumes, the lights and the sound combine to create a spectacular that the whole family will love.

Castillo de San Miguel is one of the locations we can rent to organize something unforgettable. For requests and more information send our events department an email: events@clubcanary.com.