The pyramids and mummies of Tenerife

The mystery of the Pyramids of Güímar

The Guanches had knowledge of geometric symbols. This is known because a form of decorative pottery was found by archaeologists in Tenerife. Researchers also found traces of pots from the time of the Guanches in the lava cave near the pyramids of Güímar. For this reason, many people thought that the Guanches were responsible for the construction of these pyramids. Around 1991, a team of archaeologists from the University of La Laguna began carrying out various research projects. During this investigation, they found pots with pieces that turned out to be imported and therefore did not turn out to be very historic. By examining the different layers of sand on the pyramids as well as the found pieces of pottery, the construction of the pyramids in Tenerife was estimated around the year 1900.

Where did the mummies that were found in Tenerife came from?

The Guanches also practised embalming and mummification of their dead, as well as drilling into the skulls of the living. Mummies were kept in caves, but the other Guanches with a lower social status were buried. For those who like to see these mummies, it is possible to admire them in the museum of Tenerife.

The deadly poison garden of Tenerife

Next to the pyramids of Güímar you can discover a botanical garden with a remarkable poison garden attached. In this Tenerife poison garden you will find more than 70 different species of poisonous plants from all over the world. Next to each plant you will find a sign with information about the strength of the poisonous plant and its side effects. A walk through this poison garden may not be the most romantic activity in Tenerife, but it is absolutely interesting and exciting! 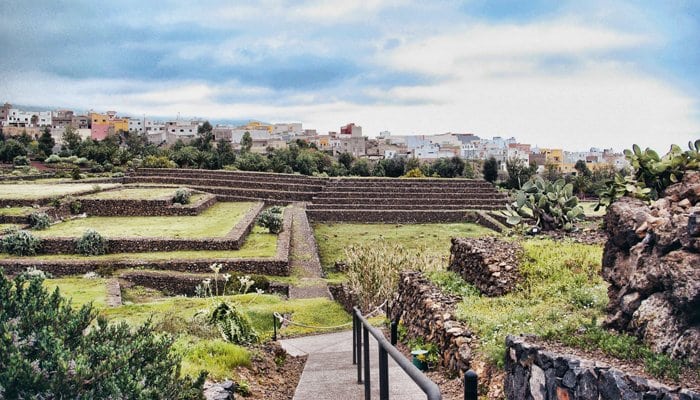 How to visit the Pyramids of Güimar

The pyramids are located in the village of Güímar which is about 40 minutes drive from the Club Canary office in Costa Adeje. Making a stop at the pyramids is a nice 1st stop for your road trip to the north of Tenerife. It is also possible to visit the pyramids by bus. However, this is not very recommended because it can be long and stressful for people who do not travel regularly by bus on Tenerife.

The entire complex consists of a museum, pyramids, botanical garden and poison garden and is normally open all week from 9:30 to 18:00, except on 25 December and 1 January. There are different tickets offered at the pyramids and prices vary from 4,50€ to 18€, depending on the tour chosen. On average, the visitor spends about 90 to 195 minutes per visit. Tickets can be bought at the counter desk at the entrance. Should you have any questions regarding the tickets or the pyramids, please contact the reception desk of the museum in Guímar on +34 922 514 510. The address of the pyramids in Guimar is: Calle Chacona s/n Güímar, Tenerife, I.C, E38500, España. Note that the pyramids of Güímar are still closed due to covid 19, for possible updates check the website: www.piramidesdeguimar.es

Club Canary updated this article about the pyramids of Tenerife in 2021. You can request a 5€ gift coupon from here, which you can use for excursions in Tenerife.