Lying on the beach is one of the best things to do in Tenerife. As Tenerife is a volcanic island, there are mostly black sand beaches. However, you can also find white sand beaches in this paradise. Either if you are looking for small, magical spots to visit with your family or more popular and accessible beaches where you can just relax and take a quick dip, keep reading and you will find the perfect option for you.

Playa del Duque, a turquoise water beach in the luxurious area of Tenerife 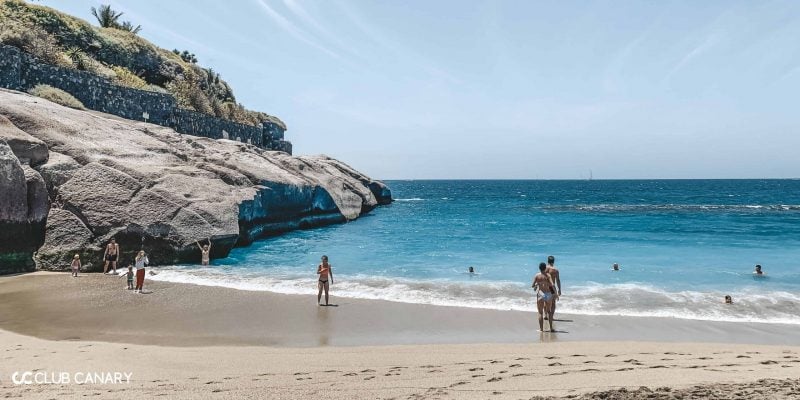 Playa del Duque is another popular white sand beach in Tenerife. With its turquoise waters, it is definitely the most appealing beach in the south of Tenerife. The beach is located in the busy area of Costa Adeje, close to a large number of luxury hotels, shops and restaurants. The beach is awarded the blue flag certification, which means that it complies with a specific set of criteria relating to water quality and environmental education and management. Playa del Duque is easy to access by car. It has sunshades, parking, restaurants, bars, showers and changing rooms. Within walking distance from the beach, you will find the Plaza del Duque shopping centre. If you visit the mall, you must stop by our office. Meet our staff at Club Canary tour agency. We are experts in arranging water sports activities and any other exciting excursions. 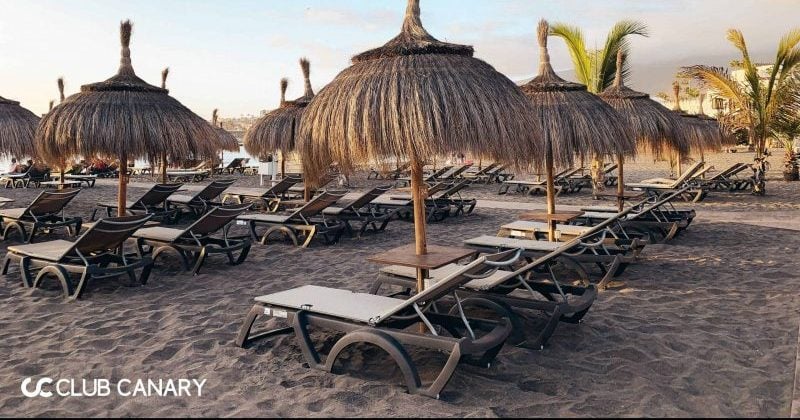 Playa de Torviscas is a white sand beach and so is Playa Fañabé. Because of this, they both constitute one of the busiest and most popular areas in the south of Tenerife. Playa de Torviscas is one of the largest and most touristy beaches on the island. It is awarded the blue flag certification. This means that it meets high standards in safety, cleanliness, and environmental care. Playa de Torviscas has all the basic facilities, such as showers, surveillance points, toilets, wheelchair access, restaurants and beach bars. Its waters are usually calm and sheltered by the breakwater. The beach lies alongside the port of Costa Adeje, and many people returning from a whale watching excursion or from a private boat trip choose to spend the rest of their day relaxing here. 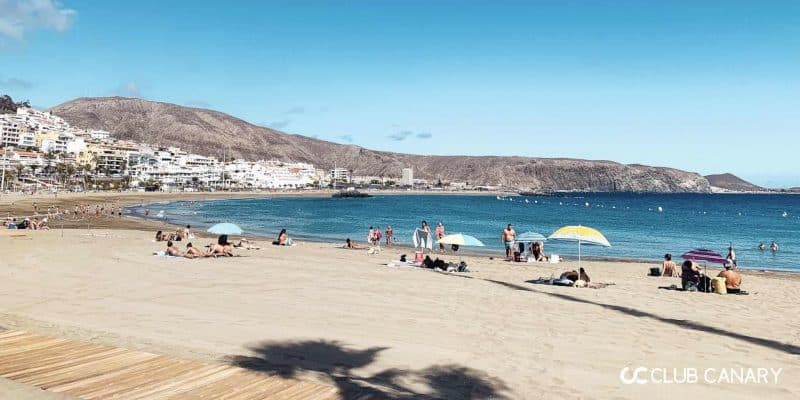 Playa de Las Vistas is a golden sand beach in Tenerife located between Los Cristianos and Las Américas. Its waves are very calm so it is the perfect place for families with children. In addition, Playa de Las Vistas is one of the most accessible beaches in Tenerife for people in wheelchairs, as it has reserved parking, ramps and walkways of access. Las Vistas beach is bordered by a wide avenue that connects it with the other beaches nearby. You can enjoy a pleasant walk along the sea. There are local shops and excellent restaurants within walking distance. If you are around, we recommend taking the kayak tour in Los Cristianos offered by Club Canary or walking to Playa de las Américas, which is mainly a rocky beach known as the most popular surf beach in Tenerife.

Diego Hernández: the hippie beach of the island

Diego Hernández beach is also called “Hippie beach”  because many people used to live in the caves along the beach. The old hippie beach residents of this nudist beach welcomed the beach visitors with homemade spaghetti, which is why the beach is also known as the spaghetti beach of Tenerife. Currently, there are not many of these residents left, as the Tenerife government cleared the caves on 16 February, 2021. Diego Hernández beach is quite isolated, but it is certainly nice to visit, especially for nudists and people with dogs. On Club Canary’s jet ski safari, you pass this beach and you can see closely the caves, where the previous residents lived.

Playa de Abama: a hidden gem at the foot of the cliff 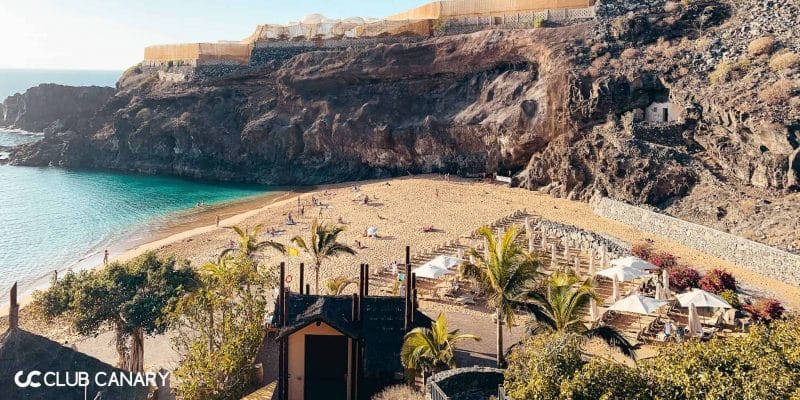 This beach is a gem and therefore belongs in part to The Ritz-Carlton, Abama hotel. The beach is free to enter, but you have to walk a bit to get there, including a large stairway. For Ritz-Carlton hotel guests only, there is a little train and a lift available to take their guests to the beach. On Playa de Abama, you will find a Ritz-Carlton beach club, where you can hire beds and eat in a restaurant. The cost of the beds is a lot higher than in other places in Tenerife. If you want to lie on your own towel on the beach, you can do so. This white sandy beach is beautiful and its waters are incredibly clear.

Playa de Las Teresitas, the most famous beach among the residents of North Tenerife 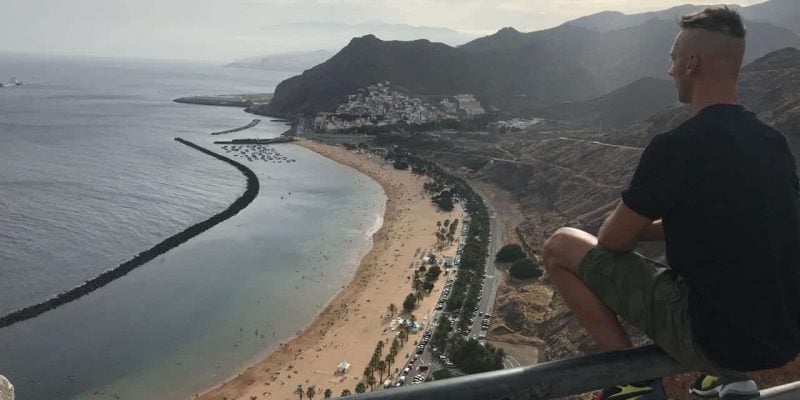 Playa de Las Teresitas is a spaciously laid-out white sand beach in the north of Tenerife. This is the beach where the locals of Tenerife meet up with family and friends to spend a nice day. The water is very calm and the beach has many facilities, including lots of beach bars and food trucks. 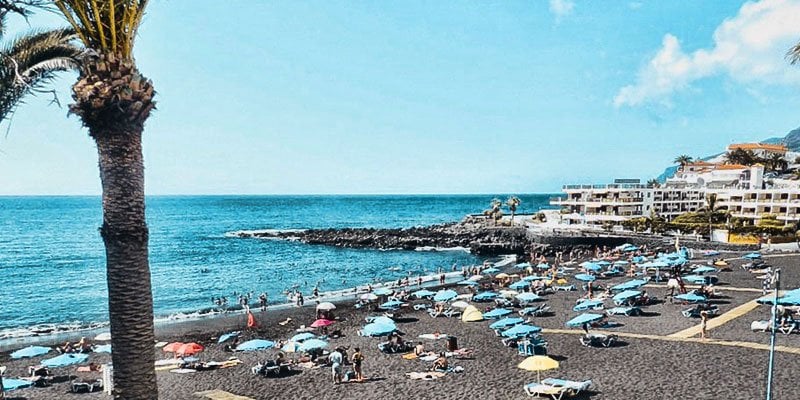 Playa de la Arena is another black sand beach in Tenerife. It is located close to Los Gigantes. Playa de la Arena is certainly one of the most beautiful black sand beaches in the south of Tenerife. It is perfect for relaxing. Additionally, from here, you will have an amazing view of the cliffs of Los Gigantes. Restaurants can be found near the beach and there is also a nice path for walking along the coastline. This is a fantastic black sand beach in Tenerife, but sometimes it can be dangerous for swimming because of the occasional high waves. Not far from the beach, you will find the harbour of Los Gigantes, from where the spectacular Los Gigantes jet ski safari departs. 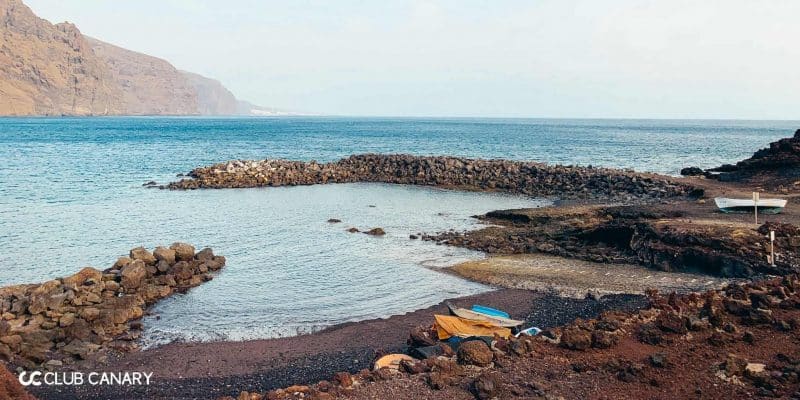 This amazing place is something really special, as it is located at the very western tip of Tenerife, next to the well-known lighthouse “Punta de Teno”. This beach with lava rocks is a perfect destination for people who want to enjoy nature, relax and possibly enjoy snorkeling in Tenerife. 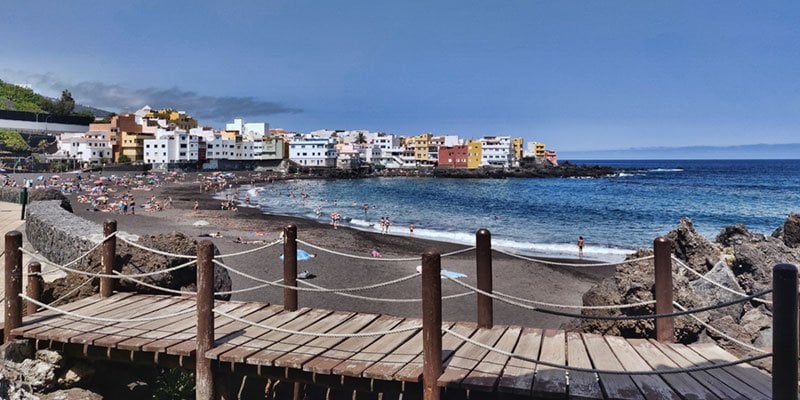 Playa Jardín is an urban black sand beach in the north of Tenerife. The beach is located in Puerto de la Cruz, a popular tourist spot. Playa Jardín is a great option if you are with your family in Tenerife, as it is very well organized. The promenade connects with a playground, a restaurant and a beach club. There is also a nice square nearby called Plaza del Charco, which is certainly worthwhile visiting if  you want to get a drink or have a delicious meal.

Playa de Benijo: an enchanting black sand beach in the north of the island 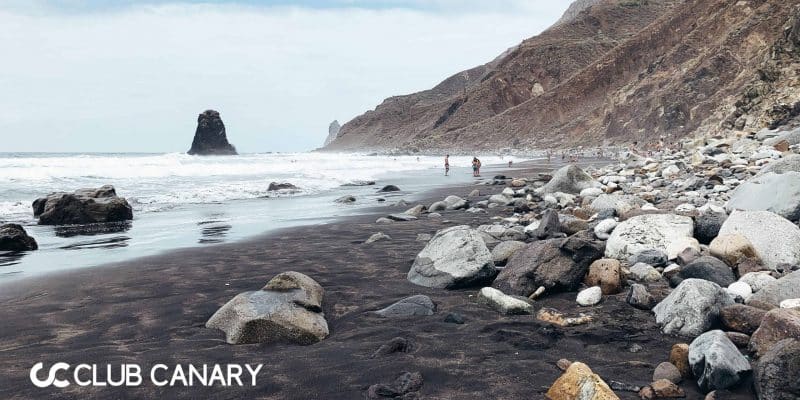 Playa de Benijo is a stunning dark-sanded beach located in the north of Tenerife, close to the area of Anaga Rural Park. The beach is, above all, ideal for fans of untouched nature, as it has been completely left in its original condition. Take everything you need for your time there, including water, soft drinks, snacks and a sun brolly, as there are no facilities in Benijo. There are a few rustic restaurants above the beach though, where you can enjoy delicious local dishes after going to the beach. Playa de Benijo is one of the quietest and most isolated beaches of Tenerife, with a medium occupation in the summer and low the rest of the year. It has very little presence of tourists since there are not many who pass through this remote area during their holidays. It is advisable to visit this beach when the tide is low or in the hours close to low tide.

Find the 10 mentioned beaches in this map

Club Canary wishes you lots of beach fun, and let us know in the comments what your most favorite beach in Tenerife is!

Yachts for hire in Tenerife

Best things to do in Tenerife
Back to home
Tenerife beaches